Water Blogged Posted on October 18, 2011 Posted in Uncategorized No Comments 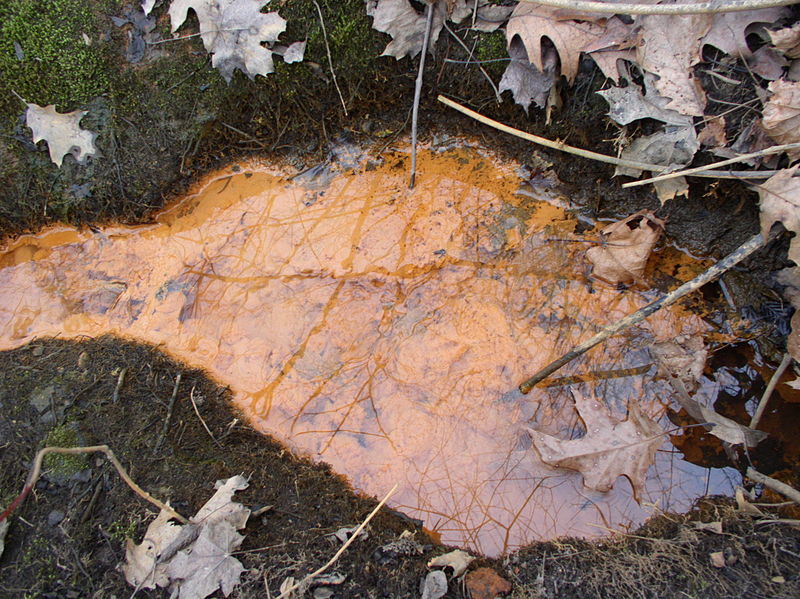 Here you can see a pool of surace water infected with Iron Bacteria.

What is Iron Bacteria?

Iron Bacteria is a name for a large diverse group of bacteria that have a significant effect on water filtration systems. Iron bacteria need energy to grow, they get this energy from the oxidation of the soluble Ferrous Iron (which is very common in groundwater) to the insoluble Ferric form. Only a small amount of energy is produced from this reaction, therefore Iron Bacteria have to oxidize large amounts of iron in order to grow. The result is an accumulation of Iron Precipitates along with Bacteria that form into Biofilms that excrete “slime”. This “slime” enables the Iron Bacteria to attach to surfaces such as water filtration pipes and pumps. Iron Bacteria causes restricted well performance from the plugging of groundwater extraction as well as the clogging of well parts including screens, casing, inlets etc. The blocking of these components can be extremely rapid, and reduce the flow of wells to below operational requirements in a short period of time. In some cases it can cause pump burnout or the complete obstruction of components and prevent water flow completely. This of course, increases the cost of repairs, plumbing and maintenance. Iron Bacteria can also cause other problems such as corrosion of plumbing, turbidity, odor, and staining of water (which is usually red, orange or brown).

How to Tell if You Have Iron Bacteria:

A simple home test can be done to Check for Iron Bacteria. A sample of water can be collected from the closest outlet to the bore in a clear sealable bottle (such as a clean water or soda bottle) Let the water sit for 24 hours, if Iron Bacteria are present they will generally form small clumps of iron colored material suspended in the water. Other indications of Iron Bacteria are rusty colored slimy build up on pipes, reduced water flow or rusty colored water. A Visual Test can provide information as well.

How to Treat Iron Bacteria:

The best treatment for iron bacteria in private well water is normally the combination of a Chemical Feeder System and a Terminox™ ISM backwashing filter. Not only is this system extremely efficient and economical in removing iron bacteria, but it also removes sulfur, manganese, dirt, turbidity, taste, smells, color and even strong chemicals such as chlorine. One of the huge advantages of this system as well is that it can also raise the pH of the water if needed in most cases. This is a great water treatment solution for private wells, irrigation systems, sprinkler systems and virtually every other situation where iron bacteria is present in your water supply. And this system makes the water clean and tasty for your whole family!